This photograph of Bristol’s most famous Clifton Suspension Bridge is available for sale as a signed limited edition print. The image has created a lot of interest when on display in the studio. It is made up of the combination of 20 photographs to increase both the detail resolution of the image and also the dynamic range, recording both the significant highlight detail around the bridge lighting and also the shadow detail particularly within the foliage.

I love the shot because of the colour of the many light sources. By comparison the colour of the daylight is very blue, the florescent and led lighting green, the sodium lighting on the Portway road below orange and the tungsten lighting from the houses yellow. Notably this is not a blue sky shot being overcast, but that does not obscure the colour of the remaining daylight at this time.

Just beyond the Clifton Suspension Bridge, in between the suspension bridge hangers, you can also see the Clifton Observatory. The first image of the limited edition series of just 95 was purchased on the first day it was framed and on display in the studio by a chap called Chris, a builder who had refurbishments the large house on the right at the bottom of Sion Hill. Currently the image is on display upto 2000mm wide in a number of locations both corporate and also in David Lloyds Club in Bristol and is available in the studio.

The image clip below shows the approximate detail of the photo. The web compresses the image so it is not a true reflection of the image but you can click to view it a bit larger. 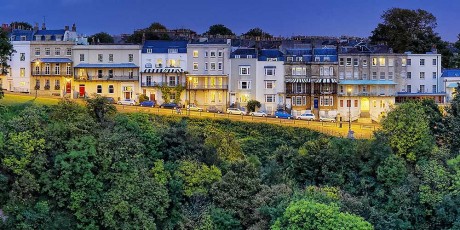 This site uses Akismet to reduce spam. Learn how your comment data is processed.

This website uses cookies to improve your experience while you navigate through the website. Out of these, the cookies that are categorized as necessary are stored on your browser as they are essential for the working of basic functionalities of the website. We also use third-party cookies that help us analyze and understand how you use this website. These cookies will be stored in your browser only with your consent. You also have the option to opt-out of these cookies. But opting out of some of these cookies may affect your browsing experience.
Necessary Always Enabled
Necessary cookies are absolutely essential for the website to function properly. This category only includes cookies that ensures basic functionalities and security features of the website. These cookies do not store any personal information.
Non-necessary
Any cookies that may not be particularly necessary for the website to function and is used specifically to collect user personal data via analytics, ads, other embedded contents are termed as non-necessary cookies. It is mandatory to procure user consent prior to running these cookies on your website.
SAVE & ACCEPT